Don't You Forget About Me - 30th Reunion Edition

Journey’s iconic opening keyboard riff soared from the DJ’s speakers, permeating all four corners of the packed bar, and the crowd noise died down a bit in reverence.

Like any good song will do, it got under my skin, and conversations around me began to fade away as I sang along with the classic lyrics.

I closed my eyes and was instantly transported back to the dark auditorium at our brother school on a Friday night after the football game.

I dug my clammy hands in the front pockets of the Guess jean jacket I’d bought with my own babysitting money. All the other girls had blue denim jackets, but mine was black because that’s all I could find at the discount store where my mother insisted we shop.

Here I was at my first high school dance, and being at an all-girls school, we cherished these opportunities to mingle with the opposite sex. But all the careful planning and preparation didn’t seem to be paying off. No boys were talking to me. I had bought a new eye shadow palette at Eckerd’s (again with the babysitting money), and had spent hours in front of the mirror wrestling with my Vidal Sassoon curling iron.

If you don’t look good, we don’t look good turned out to be a farce, as my baby fine hair would not cooperate with the appliance. Farrah Fawcett wings never worked for me in the ‘70s, and the hybrid Pat Benatar/Princess Di short ‘do wasn’t happening for me, either. But you make the best of what you’ve got.

Instinctively, I reached up and searched for the zit on my chin, hoping it had disappeared. But there it still sat, mocking me, eroding my confidence even further. Now I’d have to go to the bathroom to make sure I hadn’t rubbed the concealer off, exposing a shiny, red bump like when Rudolph’s fake nose popped off during the reindeer games.

I whispered to my friends that I’d be right back, but as I turned to find the ladies’ room, there stood in front of me, a Boy, blocking my path. “Hey,” he said, laughing and glancing over at his apparent wing man hovering off to the side.

I smiled in spite of myself but quickly looked down at my feet. Maybe he meant to talk to my friend, Jessica. Boys usually wanted to talk to her. I raised my eyes to meet his, and nope, he was looking right at me. His too-long, brown, floppy bangs tickled the lashes of his kind eyes, and I was thankful to notice that he suffered from an errant pimple, just as I did.

“Wanna dance?” he mumbled. The familiar melancholy intro of Stairway to Heaven propelled a surge of terror down my spine…a slow dance. I must have stuttered a positive response, because The Boy’s shoulders appeared to slightly drop with a sense of relief, and he started down the stairs of the auditorium towards the dance floor at the bottom.

My fight or flight response kicked in, and I figured I could either make a break for the ladies’ room, or follow The Boy. One of my friends elbowed me from behind, giggling, and I fell out into the aisle in a daze, only to see The Boy waiting for me.

The next thing I knew, we were on the dance floor, and The Boy had his hands on both my hips, encircling me in a haze of Drakkar Noir and sweat. I glanced at the other couples on the dance floor and realized I should put my hands on his shoulders. Some girls even had their hands cupped around the boy’s neck, but I didn’t think I wanted to try that yet.

I marveled at the ridge of his muscular shoulders beneath his soft flannel shirt, and we began to sway to the music, myself in a dizzying state of internal hysteria. I had never been this close to a boy before. At least not like this.

We held that position for what could have been ten seconds or ten minutes, I was too woozy to tell. And then, POOF, the song was over, and as quickly as he’d found me, he disappeared, with a “thanks” and a crooked smile.

He was gone, and I didn’t even know his name.

I felt a nudge, and I snapped back to reality to find my friend, Jessica, 30-something years later, looking practically the same as she did that night at the high school dance long ago.

The group of old and new friends we’d been hanging out with at our reunion that night laughed and carried on without missing a beat.

Do I go to these reunions because high school was the best time of my life, and I’m trying to relive it? Clearly not. Am I hoping to prove to others that I’ve “made it” or whatever? No. I actually snorted while writing that, because I honestly don’t believe there is such a thing as having “made it.” One man’s success is another man’s version of hell.

This is why I go: I see our collective high school experience for what it was, a mixtape of moments ranging from torture to pure bliss, hitting all the highs and lows in between. We are all bound by what we went through those four years while we were putting the finishing touches on our young adult selves.

Lord knows we made lots of mistakes along the way, and certainly we weren't finished products when we curtsied in front of the Jesus statue in our white dresses. But no one else in the world had this same experience during this foundation-building, character-forming time of life.

In spite of the caste system of high school social politics, we all still shared the same oxygen in those hallowed halls, whether we liked it or not. We all survived Sister Damien Flood’s medieval fill-in-the-blank Old Testament exams. We all went through the lunch line with the nacho lady who asked, “you want meat?” We all ate Dolly Madison Zingers out of the vending machine during our breaks in the student center. Ok, maybe that was just me.

And there, at the end of Main Hall, we closed the final chapter of our story together. Our class portrait composite still hangs there today, flanked by the other women that came before and after us, and although it was a drop in the bucket of our school’s history, it was our piece of history.

So when it comes to reunions, I know it’s scary, but let’s just agree to show up for one another, okay?

And if you do, you might just find yourself on the dance floor, singing all the words to an AC/DC song from the ‘80s with a girl/guy you never even spoke to in high school. And that right there is 24 Karat Reunion Magic and exactly what the world needs more of now…people who aren’t the best of friends tossing out the labels of our past lives and bridging the gap of formalities, pretenses, and preconceived notions.

I loved cutting a rug on the dance floor with my BFFs that night, but even more, I loved rapping all the words to “Bust a Move” with girls who sat at a different lunch table back in the day.

These girls are like unwrapped Christmas gifts from holidays past. I delight in getting to know girls (and guys) with whom I didn’t hang out back in the day. Come to find out, we have lots in common and could easily have been friends. We just so happened to not be in the same circle, and you know, to teenagers, the boundaries of their circles might as well be made of barbed wire.

On my drive back home the next morning, running on four hours of sleep and a peanut butter bagel, I couldn’t help but think of the movie, “The Breakfast Club.” Each of those kids came from a different clique at school, yet by the end of the movie, they found they weren’t so different after all.

And not to compare our reunion to a detention, but if we had to write a collective letter to the powers that be, I think ours would be pretty similar to the one Anthony Michael Hall penned in that infamous film:

To Whom It May Concern,
We accept the fact that we had to sacrifice four years at this school with no boys, plaid skirts, and nuns that kept us in line. We actually look back on these things fondly now. We may have done some things wrong during that time, but we think you’re crazy to make us write an essay telling you who we think we are. You saw us as you wanted to see us. In the simplest terms. The most convenient definitions. But over the years, what we found out is that each one of us is a brain, and an athlete, and a basket case, a princess, and a criminal.
Does that answer your question?
Sincerely yours,
The Class of 1988

We always were a bit on the rebellious side, weren’t we? 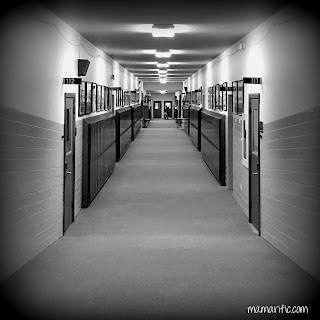