All Hail to "The Kid" 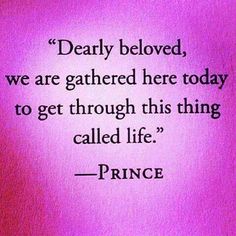 Electric word, life, it means forever, and that’s a mighty long time.  But not long enough for the pop, rock, funk, and R&B icon who transcended classification.  He died at 57, which is only ten years older than my husband.

Shit is getting real around here.

2016 is killing me…David Bowie, Glenn Frey, Merle Haggard…I just can’t take anymore.  You know my devotion to Bowie and how his death affected me.  Here’s the thing about Prince, as so eloquently put by Martha Quinn today:  Bowie and Frey, we shared them with other generations.  Prince?  He was ALL OURS, the MTV generation.  He belonged to us, and we belonged to him, Raspberry Berets, and all.

For so many of us, and I’ve heard this echoed repeatedly today on social media, it’s like a part of our youth has disappeared with his death.  Every time one of these iconic artists dies, I feel like I’m holding the photograph from Back to the Future, where people are starting to disappear the longer Marty stays away from 1985.  Just knowing that Prince is no longer on this Earth to belt out, “Let’s Go Crazy” is just too much.

Saying goodbye to Prince means saying goodbye to so many of our firsts:  first kiss during the slow dance at the first high school dance after a football game, first R-rated movie we snuck into, first air guitar solo (Let’s Go Crazy), first time to realize we were listening to something we shouldn’t have been listening to.

Like Bowie, Prince refused to be defined by gender stereotypes, and that was somehow okay with us in the ‘80s.  He danced better in high heels than I ever could.  He was mysterious, guarded, and soft-spoken with words, letting his music do the communicating.  He refused to be owned by anyone and was constantly blowing apart our expectations.

His prolific songwriting puts modern artists to shame.  In fact, as my tween daughter and I were listening to a Prince tribute in the car tonight, our conversation jolted me to the realization that this generation doesn’t have anyone remotely like Prince.  My daughter cited a musical entity called, “I Heart Memphis” as a modern iconic musical influence.

They (he?) apparently sing a song titled, “Hit the Quan.”  I don’t even want to know what that means, but I’m hoping it has nothing to do with the rape charges that popped up when I googled him.  Bottom line, most of the artists of today are nothing but a blip on the radar of money-churning pop charts, sadly.

So while I sit around here tonight, feeling glum, reminiscing and crying to Purple Rain, I’m also praying for the future of our children, their musical and artistic landscape, and the world in general.  Because Prince was a true artist, of which the modern era is sorely lacking.

And we need true artists and poets to take our hand when we’re hurting and lead us to higher ground.  To be there for us when our family and friends fail to show up.  Someone to soothe our hearts with music and lyrics when nothing else can reach us.

These days, that kind of trust in music isn’t expected or deserved.   If you can lip sync to it on musical.ly, it’s “iconic.”  Back in the ‘80s, you had to earn it.  Prince earned it tenfold.  We may have lost his body on this planet, but we will always have his music.

And I will never stop playing it. 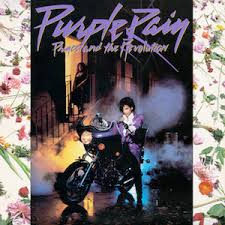