The Art of Fangirling - Part II

A solitary bead of sweat, or possibly a tear, slid down her cheek, cutting a path in the heavy makeup that had been applied with great care.

“I’m more nervous right now than I was on my wedding day!” she panted.

Her voice rose and fell, rolling and uneven, teetering on the very edge of something more than what she could contain.

Her thickly-lined eyes darted back and forth, frantically searching for the object of her affection.

She clung to her cup of water as a life preserver, a buoy in the storm of her frenzy.

Rick Springfield has an incredible connection with his devoted fans of over three decades, as documented in the film, An Affair of the Heart.  Some of these women (and men!) have unbelievable stories of how his music changed their lives.

And it’s a two-way street. In the film, Rick admits that performing used to be all about himself, but now it’s his way of connecting with people.

He strives to make himself truly accessible to his fans.

And as with anything, you have to take the good with the bad.

There are varying degrees of Fangirls.

Level 1: Devotion and loyalty, with an appropriate level of excitement; all faculties and brain function clearly intact.

Level 2: Level 1, plus propensity for temporary episodes of Head in the Clouds, but with no long term negative effects.

Level 3: Levels 1 & 2, plus a disconcerting break from rational thinking regarding the subject. Abandons social norms and begins to lose touch with the reality of daily life.

I would say that I fall somewhere between Levels 1 and 2 (more like 2 after I’ve recently made contact with the subject).

But you have not experienced the high-functioning psychosis of which the human brain is capable until you’ve seen a Level 3 Rick Springfield fan.

Having tossed her cup of water aside, her hands were free to shake with the ferocity of a junkie coming down off a high.

Except that she was about to get her fix.

She fumbled with her belongings and sputtered nervously to my friend, who happened to be directly in front of her in the Meet and Greet line.

“I need you to record me getting my picture taken with Rick, ok?”

“This may be the most important thing you ever do, ok?”

We exchanged a secret eye roll and a quiet snicker.

Who was this woman? Did she have a family? A life?

She regaled us with accounts of how many concerts she’d been to, how many times she’d met Rick, etc.

This meeting was of the utmost importance to her, as she’d had “fat surgery” since the last time she saw him.  Her words, not mine.

In one instance, she’d hurt her leg climbing over chairs to get to Rick at a concert. She went to the doctor, who mistakenly wrote on her chart that she’d injured herself at a Bruce Springsteen concert.

She was infuriated and demanded that her medical record be corrected.

On another occasion, she met Rick in Corpus Christi, in 102 degree heat. She hugged him, got his sweat on her shirt, and has saved said shirt in a Ziploc bag to this day.

At another fan’s tale of woe at missing part of the show when nature called, she scoffed, “I don’t worry about incontinence at Rick’s shows. That’s why I always wear black. I had to apologize to the guy behind me at the last show.”

A third woman joined them later to complete the trio with “Forget Jessie’s Girl, I’m Sylvia” which I was told only Super Fans would get.

The concert was starting, and I spotted Code Red in the front row, our seats directly behind her. I made a mental note to be on the lookout for any suspicious puddles.

She made it clear to everyone around her that if any guitar picks were thrown into the audience, they were hers. No questions asked.

And we all nodded our heads in agreement, because although I’m sure she’s a lovely person when she’s not acting crazy, this is not a woman you want to throw down with over a tiny piece of plastic.

From the moment Rick took the stage until the last chord was played, she made it her mission to get his attention.  At one point in the show, once he really began to sweat under the lights and Texas heat, she threw him a tissue, presumably to mop his brow.

He jokingly blew his nose with it and tossed it back to her. She snapped up the tissue and began to rub it all over her face.

And true to her promise (or threat, depending upon how you took it), each time he threw a guitar pick into the audience, she reacted like a Hunger Games tribute vying for the last backpack of supplies at the Cornucopia.

I’ve thought about this woman over the last few days and wondered how she’s getting along.  How she’s handling the Day-after-Christmas letdown now that the big event is in the past.

Is she sad?  Is she tormented?  Is she already plotting her next encounter with Rick?

I’ve also thought about Rick, and whether or not these people freak him out.

Yes, he enjoys making a connection with his fans.  But would you want to be groped by perfect strangers on a daily basis?

Code Red was practically foaming at the mouth as she rubbed all over him at the Meet and Greet. He joked that she was literally “vibrating” when she touched him.

At one point during the concert when he ventured to the edge of the stage, she made a grab for his leg and continued to go exploring quite a bit higher up than was publicly appropriate.

How would we react if that was a male feeling up a female performer?

I think it would make us uncomfortable.

And I can assure you that this made us uncomfortable, too.

I sympathize with her Fangirl heart, but I can’t quite wrap my mind around the extreme to which she pushes it.

For me, it's more of an innocent connection.  Rick and his music take me back to a defining point in life: the very last time that I remember being a kid.

Riding bikes in the heat of the summer. Calling in to radio stations to request songs. Secretly playing with Barbie dolls.  Sneaking peeks at soap operas on tv. Puppy love.

Acting all grown up and then reverting back to childish tendencies.

Rick brings me back to that girl I once was, before things got so complicated.

And although I hope I won’t be publicly embarrassing myself in a Code Red manner, I will always be a devoted fan hovering somewhere between Levels 1 and 2.

After all, I give my heart and soul to my family on a daily basis. And I wouldn’t trade it for the world, this wonderful life of mine.

But sometimes it’s just plain fun to take a trip to Cloud 9 with Rick every now and again.

I promise, I’ll always come back. 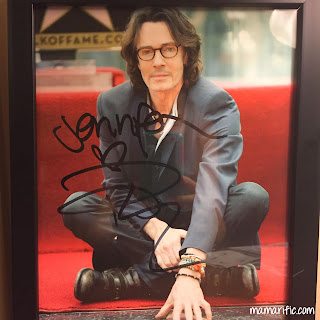 In case you missed last week, you can read about my experience meeting Rick Springfield in The Art of Fangirling - Part I.