"Thanks for your business, folks, I’ll have them bring your new car around, so you can transfer your belongings."

The young salesman, who was not at all unpleasant, gave each of our sweaty palms a mild shake and disappeared into the depths of the crowded dealership.

Husband and I looked at each other, overwhelmed and pleased at what we’d accomplished: the numbers, the negotiating, and the desired outcome of the new car.

But "transfer your belongings" rattled around in my head, searching for a place to settle and not be found. The reality of a new car was exciting, but the finality of saying goodbye to our old one brought an unexpected wave of emotion.

"It’s metal and rubber, Jennifer, get over it," I chided myself.

But it was so much more. It was the last tangible piece I had of my Dad.

Dad bought himself a car in Dallas Cowboy Silver, back when the Cowboys were less than inspiring. His devotion to the team, as well as the car, never wavered. But he offered to sell us the car once I became pregnant with our first child, and we needed a more reliable car for our new family.

We took him up on it and set up a payment schedule, simple interest only, at his insistence. I took great pride in mailing him our payment each month, showing him how responsible and adult we could be. Equal pride was shown on his part when he called each month to thank me for our timely payment.

It was not just a financial arrangement, but a testament of devotion, him to us, and us to him. The security and satisfaction of knowing that he was there for us, like a safety net underneath the tightrope of new parenthood we were walking.

Now it’s eleven years later, and the time has come to part ways with Dad’s car. So much has changed in these years. He never met our son, his namesake. He would never see our daughter become a young woman. He would never know the troubles our family would see.

I walked out of the air-conditioned dealership, into the sticky, hot afternoon, wiping off the condensation that formed on my sunglasses. Approaching the car, I could almost see his gnarled, old-man knuckles gripping that steering wheel, and the bumper sticker touting "These Colors Don’t Run" carefully placed in the back window.

"Hey, check this out." Husband held out his upturned palm. "Look what I found in the glove compartment."

He never left home without several in his front shirt pocket. He collected them like rare stamps, gathering them from rest stops and small-town diners across Texas.

Today, I had to say goodbye to that car.

But I would never have to say goodbye to my Dad.

The toothpick told me so. 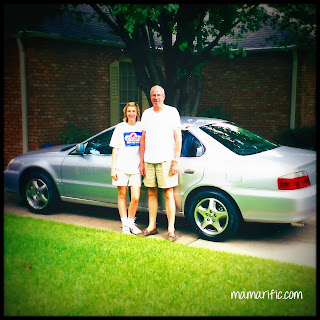 Happy to be back with the Yeah Write people this week!  Come read, write, and vote with us.