I smoothed the edges of the poster, pressing down the corners, willing them not to curl back from the faded, yellow wall.  I’d taken special care to use poster putty, and not tape, like Mom said.

I stood back to admire my work, and sensed Dad in the doorway, ready with a snide remark.


Dad chuckled and turned around to retreat to his shed outside, away from the loud music that was soon to be blasting from my Pioneer speakers.


We staked out our spot among the sea of sweaty bodies, not too far from the stage.  As more people arrived, I could feel the crowd swell up behind us, nudging us in tighter and closer to our neighbors.  The downside of a general admission show, but something I could tolerate in order to see one of my favorite artists from the ‘80s.


I found myself pressed up next to an interesting character, a guy about seven feet tall, with long black hair, a cross between a young Anthony Kiedis and Chewbacca.  When the lights dimmed, indicating the start of the show, he began to shout, arms flailing, and promptly bonked me on top of the head.


He apologized, I took it in stride, and off we went as Adam Ant seized the stage, performing a range of hits and new material, with some obscure songs peppered in.


The poster-perfect image I’d held onto all these years was brutally shattered by the reality that time has marched on.  He’s a bit older, a bit chubbier, and moving a bit slower.  But aren’t we all. 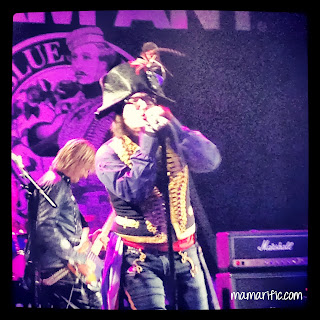 As I scrutinized each detail of his physique, I couldn’t help but find an equally disturbing truth in my own progression towards the grave.
I settled on his mid-section, specifically the paunch of tummy that threatened to bust out from under the bottom of his signature British cavalry jacket.
I peered down at my own 42 year-old, post-baby belly and silently vowed to start an ab workout this week.


When he launched into his hit single, “Strip,” which used to evoke hysteria in girls clamoring for a glimpse of his washboard abs, I secretly prayed, “Lord, please don’t let him strip.”


Of course, Anthony/Chewbacca next to me had no issue with ripping off his own shirt and waving his arms about, once again.  My chin lined up directly with his shoulders, so I had to bob-and-weave to avoid ending up with my nose in his right armpit.


At least he had good abs.


Other highlights included "Antmusic," “Desperate But Not Serious,” and the massive radio hit, “Goody Two Shoes.”
As with most ‘80s shows I’ve attended, the range of emotions vacillates between high and low.  The highs of reliving the cherished music and memories that accompany.  The lows of reconciling the preserved image of the artist(s) in my mind vs. the reality of current life in the flesh.
But ultimately, the hope that comes from knowing that, in spite of this, the artists can still succeed at putting on a great show, like Adam Ant, doing what they love.
And so can I, Mommy belly, and all.