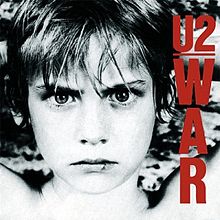 Does seeing this image stir anything inside of you?  If you were an adolescent in the early 80s and in touch with modern music, it probably does.
For me, it conjures up memories of Guess jeans, Pac-Man and first dances.
The Outsiders, War Games, Return of the Jedi, Valley Girl and Risky Business.  The Police, Men at Work, Michael Jackson, Dexys Midnight Runners, Duran Duran, Thomas Dolby, David Bowie, Prince, The Pretenders, The Clash, Adam Ant, Rick Springfield, and Def Leppard.
And U2.
Thirty years ago today, in February of 1983, U2 released their third studio album, “War,” featuring the singles “New Year’s Day,” “Two Hearts Beat as One” and “Sunday, Bloody Sunday.”
People were ditching their cassette tapes in favor of this crazy new thing called a Compact Disc. “War” was the first CD I ever bought.  I saved up my allowance and instead of spending it on lip gloss and nail polish, like most of my friends, I talked my mother into making the now-familiar trek up to Sound Warehouse.  There I plunked down my $14.99 plus tax for my first CD by an Irish rock band with a funny name.
It would become one of my favorite albums of all time.
Upon return, I ran back to my room, hastily unwrapped my new package and slid the CD into my brand new Pioneer CD player.  The military-style drum beat of “Sunday Bloody Sunday” filled the air, and then the harsh guitar riff by The Edge.  I adjusted the levels on my Technics equalizer to even out the bass and treble.
As I sat on my pastel-colored canopy bed in my room covered with posters of Duran Duran, David Bowie, Paul Young and ponies, I listened to the lyrics and tried to understand what they meant.  For a young, white girl living a pretty sheltered life, the images of war, modern war, were largely unknown to me outside of a textbook.
Other than the Iran hostages and the assassination attempt on Ronald Reagan on the 6 o’clock news, politics and social injustices were not on my radar.  Current events, for me, consisted mainly of Princess Diana’s wedding, the launch of the space shuttle Columbia and Luke and Laura’s wedding on General Hospital.
I can't believe the news today
Oh, I can't close my eyes
And make it go away
How long...
How long must we sing this song
How long, how long...
'cause tonight...we can be as one
Tonight...

Sunday, Bloody Sunday
That was pretty earthshattering stuff for my naïve, little ears.  Broken bottles under children’s feet?  Bodies strewn?  Could this be real?  These images scratched at the door of my closed-minded young brain.

And the battle's just begun
There's many lost, but tell me who has won
The trench is dug within our hearts
And mothers, children, brothers, sisters
Torn apart

That album, and that song, in particular, jolted me off of Planet Jennifer and jarred me into the reality of suffering in the world. My self-absorbed assumption that my problems were all-important seemed embarrassing and ludicrous.  I spent hours listening to that song, deciphering its code, as well as each song on that album.


New Year’s Day introduced me to the Polish solidarity movement.  Seconds warned me of the spread of nuclear weapons.  Two Hearts Beat As One stirred feelings of puppy love and dedication towards my first big crush.  40 (based on Psalm 40) stirred me to identify with Bono and his Irish Catholic roots, softening me to my plaid, Catholic schoolgirl’s skirt.
Thirty years later, I still appreciate the effect this work of music had on my growing mind back then.  It opened up a new world of thinking to me, opposite from the “don’t rock the boat” mentality I was being fed by my parents.

It planted the seed of independent thought and the knowledge that it’s possible to protest things with which I would not agree.
And every time I listen to it, even now, with kids strapped in car seats and goldfish crackers on the floorboards, I feel that familiar swell of wonder and rebellion rise up in me.  I can disagree.  I can make my voice heard.  I don’t have to go along.  And as much as I want my children to mind me, I hope they absorb some of this sentiment.
So for Bono, The Edge, Adam Clayton and Larry Mullen, Jr., this album took them to the top of the charts and garnered critical acclaim.  But they’ll never know the ripple effects their music had on millions of young minds across the world, myself included.
Happy 30th Anniversary, guys, and thank you for giving us what we needed.