The Notorious Wild Boy Grew Up, and I Think He Took Me With Him 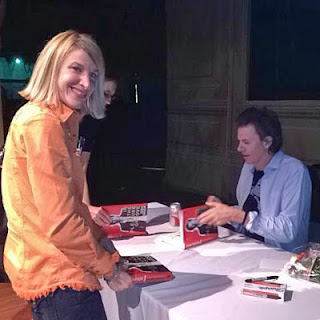 “Hullo, Jen-ni-fa.  Thanks very much for coming.”


He completed his swirly signature, closed the book and smiled as he placed it back into my lightly shaking hands.
Oh my stars, my hands are now touching something he touched!
There’s that fifteen year-old girl inside of me, rearing her hysterical head again.
Well, at least I’m not weeping uncontrollably in my seat like a lady in the third row.
In fact, it’s become clear to me throughout this entire evening that I am not nearly as bad-off as some other fans.
Forty-something ladies have come from all over the state to meet John Taylor (bass player of Duran Duran) and have him autograph a copy of his new autobiography, In the Pleasure Groove. 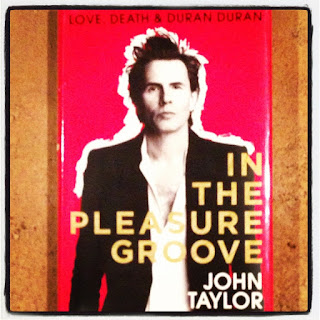 At various points in this evening, and now, after it’s all over, I’ve felt remnants of that teenaged hysteria bubble to the surface, albeit with a lot less fervor.
But it’s definitely still there.  Underneath all the resignation, fatigue and cynicism that comes with adulthood.
I felt it, and it made me feel deliciously alive.
I’ve been caught up in remembering all of the John Taylor mania while reading his book over the past week.  The beginning, picturing him as a young boy and his relationship with his family, immediately sucked me in.  How could someone who’s such a big deal come from such normal beginnings?
Another thought-provoking moment for me in the book came when he talked his parents into dropping out of school in favor of starting a band.  With no previous music lessons or identification of talent.  Nothing but pure ambition and desire.
Now I don’t know about you, but if one of my kids came to me and tried to sell me on that plan, the answer would be a resounding no.  But reading this account of JT and what he became because his parents allowed it made me think differently about my own children, and how I respond to them.
Parenting lessons from John Taylor?  Who’d have thought.

I also identified with him about how his father's death prompted him to write this book.  During the interview, JT expressed how he cleaned out his parents house in four hours, after his father's death, and later pulled over on the side of the road to throw up.  There is nothing in life as jarring-to-the-core as the loss of a parent, and his pain resonanted with me as he described each detail.
The book covers the vast expanse of his tumultuous career, relationships with the other band members, and disillusionment with himself and his life.  I found myself liking him less and less, but hoping he would snap out of it.  And this was true back in the day, as well.
By 1985, after the heyday of Seven and the Ragged Tiger, I had cooled on Duran Duran and moved on to other acts like The Cure, Squeeze and Madonna.  When I would see pictures of JT in a magazine, or hear their newest hit, I was interested, but not nearly as devoted as I had been to the band’s early sound, and the noticeably more carefree and happy version of JT that accompanied it.
The JT pictured now was serious, brooding and missing the twinkle in this eye to which I was first drawn.
The book makes this all crystal clear to me now: the depths he had sunk to as a slave to his ego, and the subsequent addiction to alcohol and drugs.
But things are different now.
I like to think that the enthusiasm I’ve felt for him and the band in the last decade with their reunion is in response to the fact that they have grown up and returned closer to their original sound.  And the twinkle in his eye is back, dare I say, due to his spiritual awakening and finding God?
Through reading about his commitment to sobriety, his wife and daughters, and hearing him speak at the book reading, I find that the new JT much resembles the original JT of the early 80s, of whom I plastered pictures all over my bedroom walls. 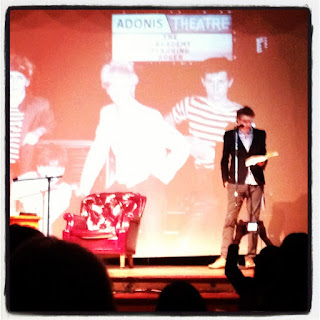 All the in-between, coke-snorting, philandering, restless and unhappy JT stuff of the middle years I can live without.
Everyone loves a redemption story, and this is one to which I feel a personal connection and satisfaction with the happy ending.
I’d hate to think that all those years of teen idol worshiping were wasted on an undeserving subject.
Upon finishing the book last night, I fell asleep and had a dream that I was discussing the book with JT and all that he had been through.
It was a really great dream, and at the end, he kissed me.  Not like a passionate kiss, but a platonic, yet meaningful, peck on the lips.
I find it interesting that in my dream, I chose to connect not with the JT of my youth, with the fedora and giant grin, sailing on a boat in Antigua.  My subconscious chose the present day JT, the one with a few wrinkles, a little less hair and a story to tell.
I believe this means that I’ve officially grown up, as well.
Email Post