Just What the Doctor Ordered

I had a doctor’s appointment on Saturday night, y’all.  It was an emergency.  Don’t worry, it was nothing life-threatening.  Just a serious case of nostalgia with a minor case of hysteria, of the teenaged variety.  But luckily, DR. NOAH DRAKE was able to fit me into his schedule, and he fixed me right up.

*insert high-pitched, glass-breaking, female scream here*
Oh, it was a night to remember, and luckily for you, I’m going to tell you all about it.  But first, let’s take a little trip down memory lane together, shall we?  You know I can’t tell a story without stepping back in time…


*****
“Jennnnnniferrrrr, what in Heaven’s name do you think you’re doing?!?!”
I smoothed the edges of the page torn from Tiger Beat magazine against the wall and replied, “It’s OK, Mom, I used poster putty, not tape!”
After getting in trouble for using scotch tape to hang a poster of puppies and kittens on my bedroom wall last week, I had learned my lesson.
Yep, I went from puppies and kittens to Rick Springfield in one week’s time.
“I don’t care what you used, young lady, you take that down THIS INSTANT!” she hollered. 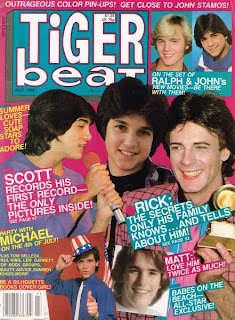 My memory is fuzzy on how that argument was resolved, but I must have won, because Rick stayed.   I added to that collection, one by one, until my bedroom wall was a mini-shrine to all the teen heart-throbs of the time: Scott Baio, Parker Stevenson (Battlestar Gallactica), Shaun Cassidy and Leif Garrett, to name a few.
It was barely 1981, and Rick Springfield topped the charts with Jessie’s Girl, from the album, Working Class Dog.  Once school was out for the summer, I would ride my purple banana-seat bike with the flowered basket and ding-a-ling bell over to my friend’s house.
She lived two streets over, her parents were divorced, and her mom worked.  Why my mother let me hang out over there, unsupervised, is a question for the universe that's outside the realm of this post.  We could do all kinds of things over there that I wasn’t allowed to do at home.  Things like dig through her newly single mom’s bathroom cabinets, which is how I learned about feminine hygiene products and other things...
The highlight of forbidden activities was to watch soap operas, especially General Hospital, since a foxy new doctor had joined the cast.  We would climb up in my friend’s mom’s huge, unmade King-sized bed with our Starburst candy and cans of Tab cola to watch Luke and Laura and Dr. Noah Drake.
I never imagined that I’d be going to a Rick Springfield concert with my husband thirty years later.


*****
Husband is a very good husband, for many reasons, one of them being that he is unfazed by my crazy little celebrity crushes.  He knew that Rick Springfield was one of my girlhood fixations, and that I had never been to one of his concerts.  So, for my 42nd birthday, he surprised me with tickets to the concert.
The most hilarious thing about the concert is that it was held at the Stafford Centre in Stafford, TX (close to Sugar Land), and our daughter had made her stage debut there at the tender age of three at her dance recital.  So, basically, our daughter had played this stage even before Rick.
It kind of made me feel sorry for him, but then I saw how much the tickets cost, and I felt sorry no more.  He obviously makes a nice little living travelling around playing his hits for his devoted fans.
We rushed to get to the Stafford Centre on time, and upon arrival, it was obvious that we were on the younger end of the age spectrum of attendees.  To be frank, it appeared that busloads of residents from the nearby Senior Center had been dropped off for a night on the town.
The crowd was a mixture of cotton-topped old ladies and 50-somethingish slightly desperate-looking women in homemade-bedazzled Mom-jeans.  We took our seats and anxiously awaited the start of the show.  The curtain went up, and much to our disappointment, there was an opening act we would have to sit through before getting to Rick.
And I can truly say this was the worst opening act in the history of opening acts.  I won’t even use the guy's name, because I don’t want to trash someone on the internet.  But he was a short, little, fat, bald man who did impressions.  And not good ones.
The high point of this guy’s act was a lame John Mayer skit with references to masturbation, followed by some ridiculous fart jokes.  It was so bad, it was embarrassing.  But the crowd loved him.  They cheered, clapped and gave him a standing ovation.  It actually felt like we were at the “Rick Springfield Theater” in Branson, MO, with this joker as the warm-up act.
But when Rick finally hit the stage, it was an electric moment.
He looked and sounded much the same as I remembered.  I felt a heart-fluttery teenaged-hysteria building, and I eventually succumbed to joining in the chorus of screams with the ladies around me.  My neighbor to my left was on her feet dancing like there was no tomorrow.  The lady behind me had “Rick Springfield” temporarily tattooed on her chest and screamed wildly throughout the show, “Riiiiick!  I loooovvveee you!”
I think, at one point, she spilled vodka on Husband, who had kindly remained in his seat, so as not to block the view of this Superfan.  He is 6’4”, you know, so he’s not exactly popular at concerts.  I was so proud of him, though, for making that sacrifice so that this lady complaining about her divorce could have a clear view and enjoy the show, which might be the only bright spot in her life, at this point.
Rick made his way through his catalogue of hits: Love is Alright Tonight, What Kind of Fool, Affair of the Heart and I’ve Done Everything for You.  And remember Love Somebody from his 1984 movie, Hard to Hold?
Of all the songs he played, my favorites were his 1982 Grammy winner, Jessie’s Girl, and Don’t Talk to Strangers, a 1983 Grammy nominee, complete with audience participation on the chorus.  And I loved the intro he gave for I Get Excited, another Grammy nominee from 1982.
He suggested that most of us as young girls had no idea that the song had an adult theme, and that we actually thought that “All night, all night” referred to an all-night slumber party at our friend’s house with our My Little Ponies.  Guilty as charged!  Makes me feel better about my daughter iistening to Katy Perry.
All in all, I had a splendid time, shook my tail feathers like I haven't done in awhile and marvelled at the fact that this guy is 63 years old.  In addition to his shows, he does destination vacation concerts, and I swear I will go on one of these trips before I die (or before he dies, hopefully!).  This year's is in Cancun, but it's next month, and I don't think I can get my passport updated in time.
But I am poised to jump on the next one and am going to talk a girlfriend into joining me.  You can even pay a little extra for him to COME TO YOUR ROOM FOR 10 MINUTES.  I can't even begin to think about that, but I'm gonna start saving my pennies now, LOL!
Haven't gotten enough Rick?  Me either.  Watch this: