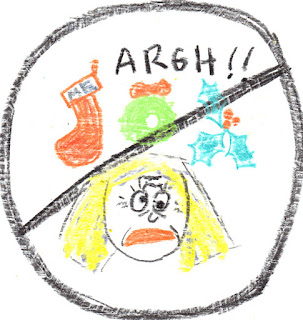 Last Fall, I wrote this post about the holidays, and how I always dread them.  That was back when I was a newbie blogger, with no idea of how words set loose in the interwebz could cause such a stir.
My piece was published by Mamapedia.  It was meant to be tongue-and-cheek, sarcastic and overly-exaggerated, yet based upon the true concept of how the holidays make me want to poke my eyes out.
Some people thought it was hilarious, and some people told me off.
This year, I am older and wiser and have a little different take on things.  I’ve been suffering from migraines, with the most recent one rendering me completely debilitated.  The neurologist sent me for an MRI of the brain.
I acted like I wasn’t scared, but I was.
As the metal cage closed around my head, and the long, thin table moved me into the donut-hole of the machine, I could only think of one thing:  my kids.  If this is something bad, what will happen to my kids?  Husband would be broken, but he would recover and take care of himself.  But what about my children?
The beeping and bonking of that machine went on and on, and I struggled to remain calm inside what felt like a coffin.  The fear and negative thoughts came at me, one by one, and I tried to beat them off like a Super Ninja Mama.  I knew if I gave into even one of them, the panic would overtake me.
Although I truly didn’t believe that it was anything serious, I think it’s human nature to imagine the worst.  Waiting for the results for the next few days, I considered what it would be like to have this life taken away from me.
Everyday occurrences like reading a book with my 2-year old or singing to music in the car with my 7-year old took on new meaning.  The little, stupid stuff like a rude comment or an unkind action from someone meant virtually nothing to me.
Things were brought into focus, and I felt a deep, desperate realization that I take so much for granted every, single day.  I spend too much time worrying about what I think I’m supposed to be doing, instead of focusing on what I need to be doing.
I allow myself to become sidetracked by things that are inconsequential.
So when the news came in that the MRI was normal, it was not only a relief, but a new beginning.  A wake-up call to stop allowing the things that should only be minor annoyances to become larger than life…the teacher’s negative comment, a criticism from a pessimistic person, an unkind deed of a stranger.
None of it matters.
For me, the holidays have been a time when I normally sweat and swear and pull my hair out to make everyone happy and fulfilled, because BY GOD, WE’RE ALL GOING TO HAVE A PERFECT CHRISTMAS!
Not so much this year.
As the holidays approach, I know that I will slip up and freak out from time to time, as I am prone to do.  Especially when I don’t meet my goal of having all my gifts purchased and wrapped by Thanksgiving, which I pledge to do every year and fail to do every year, as well.
But when it happens this time, I’m going to remind myself of what it felt like to lie on that table, not knowing and fearing the worst.  And I will thank God for the blessing of this day and the gift of days to come.

What are your tips & tricks to survive the holidays?  Wine?  Yoga?  Happy pills?