Psyched for Another 80s Mind Trip

I kicked off my penny loafers, peeled down my socks and propped my bare feet up on the dashboard of my BFF’s vintage turquoise VW Bug Convertible.  It was the end of Junior year of high school, and inconvenient realities like SAT scores and college admissions were threatening our carefree existences.  The warm breeze whipped through my hair as I tried to put these un-pleasantries out of my mind.
Comforting myself with the knowledge that happiness could still be found in a convertible ride with the radio blaring my favorite song, I hiked up my red and blue plaid uniform skirt to get some sun on my young, thin, spider vein-free legs.
The uniquely 80s sound of Psychedelic Furs and Richard Butler's deep, gravelly, sultry voice filled the air, as we cruised through the neighborhood, avoiding going home to our inescapable realities.
*****
Psychedelic Furs are known to the masses as the band behind the theme song to the John Hughes classic movie, Pretty in Pink.  Husband and I have debated about the merits of the original version of Pretty in Pink, versus the remix for the movie.  I still insist that the original version kicks the movie version’s tail.
Regardless, we both enjoyed hearing the song in question live when Psychedelic Furs played at the House of Blues last Friday night, to a crowd of old 80s revelers here in Houston.
It seems like half the entertainment factor at a concert comes from the characters in the crowd, and this show was no exception.  There were some old-ass crazy folks at this show.  We were up in the balcony this time, because I can only brave the General Admission experience about once a year.  So, we were up with the real geriatrics.
Although some of them appeared to have had their Geritol laced with some good, old-fashioned 80s Ecstasy.  One of my favorites was a white-haired, lanky guy in a denim shirt and jeans in the front row.  He was doing all kinds of funky arm movements, to the extent that I was worried he might take flight right over the balcony railing down to the stage.
His equally entertaining neighbor in the next seat sporting a Mojo Nixon shirt had a Bud Light can permanently glued to his lips.  At one point, there were words between Mojo and the lady behind him who was disgruntled that his large self was blocking her view.
Next to Mojo was a lady who looked like a Mormon or Michelle Duggar, complete with long floral skirt, hair in a bun, freckles and flabby arms, swooshing and swaying to Love My Way.
On the stage, Richard Butler, the lead singer, had the liveliness of a playful puppy and kept the energy of the show high above what I would be capable of now or especially at his age of fifty-six.  We actually saw the guy in front of us google “how old is Richard Butler” on his phone because he was clearly thinking the same thing we were.
With each song they played, I closed my eyes and felt myself move through various stages/phases of adolescence.  The peppier songs, like Pretty in Pink, reminded me of laughing with friends while trying out the effects of black eyeliner in combo with pouty, red lips.  Scrutinizing our ensembles of black stirrup pants with black lace-up ankle boots, topped off with a bright yellow sweater from the Limited.
The moodier, darker songs (my favorite being Ghost in You) reminded me of how I felt when the guy with the spiky hair and trench coat never called, or getting caught with a pack of clove cigarettes in my purse and being grounded.
Heartbreak Beat took me right back to that Spring day’s convertible ride, and I pictured my friend and I in our Ray Ban Wayfarers, singing our little hearts out, without a care in the world or a clue that our lives would never be this easy.  I mean, we thought we knew.  But we had no way of really comprehending.
And although I wouldn’t turn back the clock forever, I’d kill for one more joy-ride on a Spring day, young feet with bubble-gum pink toes up on the dash, serenaded by Richard Butler.
I’d soak up every John Hughes-ish moment of it. 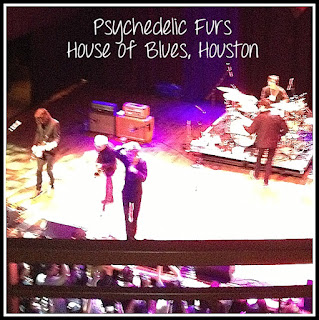