I'm Guilty of Getting Caught Up in "The Pursuit of Cool" 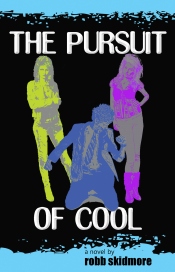 "Mom, you’re stuck in the 80s!” my daughter chided, as we drove along with Sirius XM’s First Wave Channel blared an old Siouxie and the Banshees song.  Indeed, she is right.  If I had my choice, I probably would never have left the 80s.  The music, the movies, the fashion…all of it is comfortable and makes sense to me.
Accordingly, I jumped at the chance to read The Pursuit of Cool a novel celebrating the 80s by Robb Skidmore.  Robb is an author from Atlanta who found me on Twitter and asked if I’d like to read and review his book.  How cool is that?
The Pursuit of Cool is the coming-of-age story of Lance Rally, and the trials and tribulations of his college years during the 1980s.  The story is ripe with nostalgia, and I became so caught up that I actually began digging around for my old Bauhaus and Echo & the Bunnymen tapes, before I realized I no longer own a cassette player.
As the name suggests, this story is about the cooler, darker side of the 80s, not the Lionel Richie 80s.  Lance forges a friendship with a quirky, but loveable punk guy, and Lance is drawn in by the beautifully anguished sentiments of punk/new wave music and culture.  He experiences first love and all the joys and disappointments that go hand-in-hand.
Lance bounces around between personas and career plans, all while dodging the expectations and reminders of reality, in the form of a corporate internship and consistent badgering from his Dad back home:
“What could ever be worth worrying about? He conveyed with his effortless gait.  He was young, strong and untamed.  The conspiracy would not succeed – the old men who wanted to snatch his youth, to break him, to put him in a hole and kill him.”
In running from this so-called conspiracy, Lance chooses to spend his time drinking and joy-riding with friends, as opposed to studying:
“As young men in a sports car, they were suspect, and considered likely to destroy, break, undermine or molest something.”
Skidmore’s characters are so well-developed and precise, I am already envisioning which actors would play them on the big screen.
My only slight disappointment was with the ending, in that I’m left lying awake at night worrying about poor Lance and how he turned out.  Must be the mother in me.
“The world wasn’t simple, happy, predictable Bryan Adams but was hard-luck, kicked-in-the-ass Springsteen, and the tough times not just in rust belt Jersey, but in your own backyard.   The world wasn’t quirky dialogue and get-what-you-want-in-the-end John Hughes, it was David Lynch.”
This pretty much sums up the tale of Lance Rally.  Definitely a David Lynch outcome, as opposed to a neat and tidy John Hughes mass-appeal conclusion.
That being said, I thoroughly enjoyed this book…the 80-ness, the growing-up-is-hard-to-do-ness, the music and pop culture references.
However, I predictably always wanted to be Molly Ringwald and end up with Jake Ryan.
Maybe a sequel will give me some closure??
Email Post