Celebrating 15 Years: the Soundtrack of a Single Girl 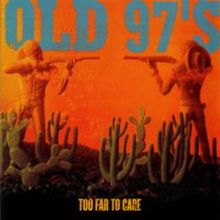 I got a timebomb in my mind Mom

The more it ticked, the more I procrastinated, partied and tried to escape the unsettled reality of my daily existence.  My 20s were chock full of emotional extremes, missteps and excessive drama over relationships and career.  Knowing everyone was waiting for me to grow up, but not having any idea where to begin.


The buoys I held tightly to through all of this mess were best friends, run-around-with friends, the neighborhood bar where everybody knows your name, and the local Dallas bands that frequented said watering hole.
One of those bands was Old 97s.  It was the Fall of 1994 when I first saw them at their CD release party for Hitchhike to Rhome at the old Barley House on Henderson.  All I knew going in was that they were one of the first bands in this hip, new genre called alt-country, along with Wilco, The Jayhawks and Whiskeytown (Ryan Adams).  I was not a regular country fan, so I didn’t know how I would feel about this alt-country business.
I must admit, I did not immediately fall in love with their sound.  I’d say their early stuff is an acquired taste.  But they had an energy about them, mixed with sharp, well-crafted lyrics from Rhett Miller that touched on many of the transitional I-don’t-wanna-grow-up feelings in which I was drowning.
I identified with Rhett’s cool awkwardness and struggle with feelings of self-doubt.  Soon, I had memorized all the words to their songs and saw them live almost every weekend at small venues around town like the Barley House, the Gingerman, Club Dada, Sons of Hermann Hall and Trees.  I couldn’t get enough of them and began to depend on their electric jolt of sound each weekend to get me through the dismal work week ahead.

Their live shows were, and still are, like an espresso shot to the soul.
Their lyrics awarded me an anthem to make it through a string of failed relationships with Wish the Worst from Hitchhike to Rhome.  They kept me on my feet with the addictive dance-worthy tunes Victoria and Doreen from Wreck Your Life.
And then, in the Summer of 1997, Old 97s took a step up in the world and recorded their first major label album on Elektra, titled Too Far to Care.  My favorite 97s album, this was the last one to capture their original country-rock vibe, with a slight foreshadowing of the new pop-laden sound that would emerge in their next two albums.

Poised on the brink of mainstream success, Too Far to Care felt like a goodbye and sweet kiss on the cheek to the days of small crowds at their shows at local bars and chatting with the band between sets.  Bigger days were on the horizon.
Around the same time, my little life had taken a turn for the better, as well.  I still hated my job, but I had found love.  As much as Too Far to Care was a turning point for the 97s, it was for me, too.  It was the last 97s album I would celebrate as a single girl.  It was the last summer I would dance with my friends, right up front, at one of their shows without any accountability.
It embodied letting go of that unstructured, unpredictable emotional roller coaster of a social life and trading it in for the newfound contentment of being a W-I-F-E.
Lucky for me, Hubby-to-Be was a fan, too.  I converted him on our second date to a 97s show at Trees in Deep Ellum.
Fast forward to August 2012, and Old 97s are touring in celebration of the 15th anniversary of Too Far to Care.  And as part of our own 15th wedding anniversary celebration, Hubby and I will be at the House of Blues this Thursday night to reclaim a piece of that turbo-charged feeling one can only get from jumping up and down with a crowd of people who know all the words to every song.
Much has happened over the last fifteen years, and I am not the same girl I was.  But she taught me plenty.  I’ve got my cowboy boots all shined up, and I want to be Too Far to Care with her one more time.

P.S. If I haven't convinced you of their awesomeness, I dare you to watch this clip of Barrier Reef and not tap your toes and smile at the lyrics..."My name's Stewart Ransom Miller, I'm a serial lady killer. She said, 'I'm already dead,' that's exactly what she said."  Brilliant.


Hoping to convert some people over at Yeah Write today.  If you are a writer who blogs or a blogger who writes, please come join the fun!