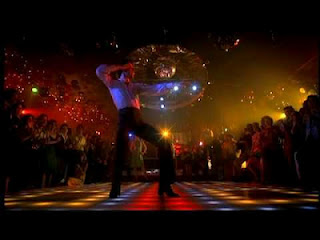 Well, this was originally supposed to be about dance floor tips and tricks for ladies. Like how to handle a group of twenty-somethings and their snide glances that can only translate to, “I pity you, you poor old ladies with cellulite who clearly don’t get out much.”
But I'm over that, so in the interest of moving on, there are other dance floor topics to cover that are not quite so depressing.  In fact, I will refer back to the concept mentioned in my original post: the White Man’s Overbite, as coined in When Harry Met Sally.
The other night, I had the pleasure of attending a fabulous party that included an 80s band and co-ed dancing.  I know, me out dancing twice in one week…shocking.  Happens about as often as a solar eclipse.
But there was an 80s band in the house, and it would've been a crime not to bust a move to that action.  And most of the other fun-loving guests felt the same way.  Especially the men.
Hence, I had a ring-side seat for some awesome male dancing, and thereby give you these four variations of the White Man’s Overbite:
The Surprise.  It’s the “oh-my-goodness, I’ve-just-stumbled-across-this-kick-ass-party” move, that can be employed by a guy who doesn’t want to appear to be trying too hard.  In all of its wide-eyed wonder, The Surprise is like the male version of the Bearcat Strut, in that it requires specific use of the hands and feet.  In this case, an upward, questioning pose with the hands and a skipping strut with the feet.  It can be used as an entrance mechanism, or as a “why-the-heck-aren’t-you-dancing?” gesture to another male who is standing on the fringe of the dance floor with his arms crossed.
The Straight Jacket.  The abovementioned, unenthusiastic male may, at some point, be dragged onto the dance floor by a hot-to-trot female, and the only move he can make is to sort of bob side-to-side.  If he’s not adept at moving his hands and/or feet in combination with this bob, then you end up with The Straight Jacket.  It pretty much looks like it sounds.  And it pretty much says, “I am not comfortable or happy about this, in any way, shape or form.”
The Lasso.  This one is self-explanatory.  It involves a lassoing motion with one arm, in time to the music.  Not to be confused with the Jersey Shore Fist-Pump, however, as this version is not usually accompanied by excessive hair gel or gold chains.  At least not in my neighborhood.  This move is particularly effective in combination with Billy Idol’s Rebel Yell.
And last, but not least…
The Domo Arigato Mr. Roboto.  That’s right, you know exactly what I’m talking about.  You’ve all seen guys attempt it.  But I swear, there is nothing better or more entertaining than a dude who has the robot moves down pat and knows all the words to the song.  Un-freakin-believably awesome.  I consider myself privileged to witness this the other night, and that guy’s wife must be one proud lady.
So, there you have it.  The four most creative and unique variations I was privy to on my most recent dancing adventure.
Is your guy one of these?  Or in a category all his own?  I’m on the edge of my seat, so please let me know.
For now, I’m going to rest these dancing feet…probably until the next solar eclipse.

Parking on the dance floor again over at Yeah Write #60.