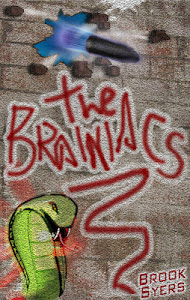 Since this blog is all about life as I know it, and books are muy importante in my world, I am once again putting on my book reviewer hat to tell you about a great book I just read called, The Brainiacs by Brook Syers.  Brook is the husband of an advertising colleague of mine, and as soon as I heard about his book, I knew I had to read it.


It reminded me a lot of Ready Player One by Ernest Cline.  Not that it’s an 80’s nostalgia trip, but rather that it’s about nerds.  I love nerds.  I was, am and hopefully always will be a nerd in spirit, just without the genius IQ to match.
But I love a story where a nerd (or group of nerds, in this case) tackle a problem and save the day.  Everybody loves a good underdog, and the main character of The Brainiacs, Theo Phillips, totally fits the bill.
Theo is a Harvard grad from Houston (yay for Houston!) who graduates and comes home to try and find a job in Journalism, during a depressed economy.  Theo ends up taking a job at a fast food joint to pay the rent, and it is here that he becomes the victim of an act of violence that prompts him to take action.
The reader is treated to separate past and present narratives that jog back and forth between Theo’s high school days and the present.  In high school, Theo and his friends formed an undercover group of super-nerds, called the Whiz Kids, in order to fight bullying at their school.
Back in the present, in response to the crime that threatens Theo, his friend, and the entire city of Houston, the Whiz Kids reunite and evolve into The Brainiacs.  Always good to modernize.
Each character has his or her own superhero name and skill set.  Check out a few of my favs:  Theo “The Brain” is into Strategy, Advanced Math, Writing & Decision Science.  Connor “Gadget Man” specializes in Electronics, Robotics, Lock Picking & Surveillance.  Zing Li “Angry Panda” focuses on Hacking, Firewall Penetration & Counterintelligence.  Raj “App Man” is the master of Data Analytics and Programming.  And Amanda “Tuff Luv” is an expert at Hand-to-Hand Combat & Martial Arts.  She’s the ass-kicker of the bunch, which I so love.
When all of these characters join forces, it makes for an unstoppable wild adventure in nerdiness, with the grand moral of the story being that brains beat brawn, hands down.  One of my favorite things about this book is to see how these characters use technology (ipads, laptops, cellphones, apps, etc.) to wage psychological warfare on the Bad Guys, and beat them at their own game.
And, oh yeah, there’s a little G-rated humor and romance thrown in, as well.
Bottom line, if you’ve ever secretly wanted to be a superhero (who hasn’t??), or watched the Justice League cartoons as a kid…if you love adventurous stories that make you feel good, laugh and give you hope, all at the same time…or if you’re looking for a fun read for the Young Adult in your life…this one’s for you.
You can learn more about The Brainiacs at Brook Syers’ Blog.  Buy the e-book today at Amazon.  If you’re like me, you’ll be itching for the sequel as soon as you’ve tapped the last electronic page.
Email Post