I'll Always be a Daydream Believer 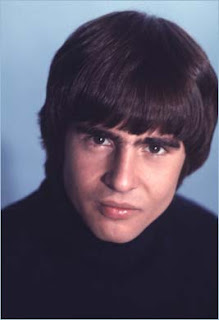 I am not the kind of person who gets really upset, or really even cares, when celebrities kick the bucket.  I was not one of the ones crying at home all day when Whitney Houston died, even though I did like her.  I guess I just feel so removed from them, that it doesn't get to me.

Or so I thought.  News today of Davy Jones' death about sent me over the edge.  Maybe because he died so seemingly young.  But probably because he captures a moment in time for me that was so special...innocence of little girlhood morphing into pre-teen behavior.  Giving up playing with dolls for listening to music.  Trading cartoons for shows like "The Monkees" which was one of my favorite shows on-air in the 70s.

The Monkees came on every afternoon, and I loved to see all their crazy escapades chasing girls and getting themselves in a bind.  And the show always ended with one of their songs.  My favorites were all the popular ones, "Daydream Believer," "Last Train to Clarksville," and of course, the theme song.

Whenever Davy Jones would come on the tv, I would kiss the screen, with my mother waiting in the wings with Windex.  He was my first crush, like so many ladies I know.  When he guest starred on the Brady Bunch, I was so jealous of Marsha and decided I would start my own Davy Jones fan club, so that I could be President, hoping he might pay me a visit.

One of my defining moments of youth was when I got in trouble for not telling my parents the truth about something and was grounded from watching The Monkees on tv for two weeks.  TWO WEEKS!!  My parents were hard core.  I think my mother just wanted a break from the Windex.

Anyway, when my punishment was up, I could hardly contain my excitement and anticipation all day at being able to watch them that afternoon,  When the time came, I rushed to the tv and turned it on...and The Monkees were not on.  They had been taken off the air, and as I would later learn, never to return.

This may have scarred me in ways yet to be uncovered by a therapist, but basically, I was devastated.  There were no DVRs or YouTube to get me my Davy fix.

But, life went on, and I eventually found new crushes for my budding teenage heart.  But I will never forget Davy Jones, since he was my first.

Davy, since I'm all grown up now, I guess I can't kiss the computer screen with your picture on it.  Although the Mom in me has plenty of Windex standing by, just in case.
Email Post