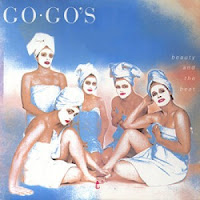 Amidst the sweltering heat and another bone-crushingly packed crowd, here I am again to hop on the 80s nostalgia train.  This time with the Go Go’s, the first all-girl rock band, who made their mark with catchy beats and wild girl partying.  The first to set the standard for “Girl Power.”  In fact, according to Wikipedia, “they made history as the first all-female band that both wrote their own songs and played their own instruments to top the Billboard album charts.”
This time, I’ve come prepared for battle by drinking about 5 gallons of water to hydrate, getting in a good afternoon nap and investing in comfortable footwear: TOMS (the crocheted kind, allowing for cross ventilation, very important in this heat) with Dr. Scholl’s triple gel comfort inserts.  Yes, I may be one step away from SAS shoes, but by God, nothing is going to keep me from persevering on this hard concrete floor to the bitter end of the last encore.  And given this has been dubbed the “Ladies Gone Wild” tour, I am fully prepared for some elbowing & jockeying for position with fellow past-their-prime 80s revelers.  This is what happens when you let loose the caged animals…mommies who’ve survived a summer with screaming babies, tantrum-throwing toddlers and sassy tween wannabees.  Crawling all over you, sucking the very life out of you.  Turning you into something resembling a wild animal at the zoo, just waiting for your opportunity to escape & wreak havoc.
Thus, we have all come together tonight, on this steamy Saturday night in August to do just that.  And no absentee husbands with their work schedules and excuses can stop us now.  You see, this night is not about men, either the ones we love or the ones we lust.  It’s not about eye candy, with some music mixed in.  It’s not about dreams & innocent fantasies about which guy in the band you want to be WITH.  It’s about which GIRL in the band you would BE.  For so many of us, seeing or hearing the Go Go’s for the first time gave us a lightbulb moment that will forever be burned on our brains.  Something that said, "Wow, I don’t have to be a groupie, I can be THE GROUP."  Think back 30 years, to the summer of 1981…
I had just moved to a new house in a new neighborhood, and was spending the summer scoping out the street by playing pick-up games of Kick the Can with various neighborhood kids until the cicadas came out, signaling it’s time to go home.  Much to my delight, I discovered a girl my same age (10), living four houses down.  And her name was Jennifer, too, which, of course meant we were destined to be BFFs.  We became fast friends, and spent the summer swimming in each other’s pools, having sleepovers and staying up late watching this new invention called cable television.  Our musical tastes were pretty much limited to the Bay City Rollers, REO Speedwagon and Olivia Newton-John, which up to this point, was the only female vocalist I had known.
Enter onto the scene:  The Go-Go’s.  As soon as “Beauty and the Beat” was released that summer, we pooled our allowances and harassed her mother until she agreed to drive us up to Sound Warehouse to get it.  We spent the rest of the summer learning the words to every song on that album, which I am proud to say, I still mostly remember.  Every song was good, although our favorites were, of course, “Our Lips are Sealed” and “We Got the Beat.”  We made up dance routines to the songs, jumping off the bed with our air guitars and pretend microphones.  We started sitting around with bath towels on our heads and Noxema on our faces, just like they did on the album cover.  We became obsessed with learning about each Go-Go: what instrument she played, what her personality was like, etc.  Each of us identifying with a different band member for different reasons:  Belinda, for her sweet voice and glamorous good looks; Charlotte, for her guitar-playing ability and pretty blond hair; Jane, for her impish grin, baby voice and pixie haircut; Kathy, for her cat-eyes and love of champagne; and Gina, for her edgy charm & killer biceps that bulged as she played the drums.  We spent hours imitating them, each of us changing which “character” we would play in the next scenario…”ok, now I get to be Gina, and you get to be Belinda!”
So, here I stand but 20 feet away from my pre-teen idols, and it’s as if they’ve come back from the dead...and looking pretty good, all things considered.  We ended up standing at the back of the crowd, on the righthand side, and our little surrounding crowd was not so much above-mentioned mommies, but a checkered and somewhat bizarre cast of characters.  Immediately behind us (and I mean RIGHT up behind us) was a group of Latin Americans who I believe took a wrong turn somewhere on their way to a World Cup match.  They were clearly not interested in the show and spent more time chugging their drinks, taking pictures of themselves and singing the "Ole, ole, ole, ole" chant.

Thoughout the show, there were various other groups of transients that came and went from our little section, among them a bachelorette & her small entourage, a highly intoxicated woman spilling her drink & stepping on toes, and several random men who tried to plant themselves in front of my friend under the guise of "looking for my girlfriend in the crowd."  Luckily, my friend was not afraid to hold her own & told them to beat it.  The pitfalls of general admission.

So anyway, the Go-Go's looked pretty good and sounded great.  Belinda was still Belinda, in all her watusi-ing glory.  She looked super cute in a silver sparkly top and her little flip hairdo.  However, the one thing that I found mildly disturbing was her pants.  They looked like a cross between pajama pants and the polyester ones with the permanent crease & elastic waist you see in the old lady section of Dillards.  But I'm being picky by noticing that, and that girl could wear a paper bag & look like a million bucks, so who am I to judge.  I'm sure at this stage in her life, she is having to sacrifice a little style for comfort, which is highly understandable, as I look down at my own two feet.  All in all, she looked and sounded fabulous, clearly with the help of a little Botox or something.

Charlotte and Kathy looked like carpool mommies, in their cute outfits and conservative hairstyles.  In fact, Kathy was the big surprise of the evening, in my opinion.  She was always the kind of homely, shaggy-dog looking one, and I thought she looked the best.  Smoking hot, and she rocked that bass.  Charlotte still has blond hair, and quietly played her guitar and keyboards.  She looked like somebody you might see at Kroger on a Tuesday and not even look twice at.  Jane still looked wacky, in a good way, and still had the same baby voice and quirky attitude.

Now, the biggest scare of the evening was poor Gina Schock, the drummer.  Or maybe I should call her MRS. Schock.  Or possibly Grandma Schock.  Yikes.  Old, old, old.  Not that she looked bad, per se, just OLD.  But such is the reality of life.  I just could have lived without seeing it right in front of my face.

They opened with "Vacation," which got everybody going, and then went into a series of songs off "Beauty and the Beat," much to the delight of the hard core fans.  They played some deep cuts that I was shocked to find my self singing along to, just like I was back with my friend in her pink & green bedroom painting each other's toenails and learning about love & heartache from the lyrics of "Lust to Love," "Fading Fast," and "Automatic."

Then they moved on through their catalogue, with songs like "Get up and Go" and "Cool Jerk", complete with audience participation, consisting of two gay guys, another lady and a young girl dancing on stage.  Random, yet entertaining.  "Head Over Heels" was a fun highlight, as well.

Another twist was that they actually played Belinda's "Mad About You" and Jane's "Cool Places."  Kind of unusual for a band to play the solo hits from the members who essentially ditched the band to try and do better on their own.  Just goes to show you that age and wisdom have taken these ladies to a better, more gracious place.  It's great to see a band that experienced so much turmoil, infighting and problems with partying & drugs come back from it and EMBRACE each other's solo successes.  Kind of makes you feel warm and fuzzy knowing they've come full circle.

Since I'm always looking for life lessons around every corner, don't think I won't find one at a Go-Go's show.  Not only do they have a fun, carefree, don't take yourself too seriously message, they also continue to show us ladies entering the second half of our lives how it's done.  I know I should credit my mother, tv and the Catholic church for raising me right, but I kind of feel like the Go-Gos had a lot to do with it.  Inspiring me as a young girl to take pride in my looks, experiment with 80s fashion and head out into the world, which consisted of the mall and Junior High, ready to conquer it.  "Can't stop the world, why let it stop you" was the lyric I heard in my head as I mustered the courage to open the doors of a new school with all new faces.  "Skidmarks on my Heart" played in my mind the first time I tried to talk to a boy and he dissed me.  "Fading Fast" became my anthem as I tried to forget my first little boyfriend, who decided he didn't want to "go" with me anymore.  Where were we going, anyway?!?!

In addition to providing us young girls with a soundtrack for life, the Go-Go’s showed us how to live with no apologies and no regrets.  How to be a girly-girl and still kick-ass and take names.   How to make mistakes and still come out on top.  And now they’re 50-something, and I’m 40-something, and I’m still taking this message to heart.  And I still want to be Belinda.  No, Charlotte.  No, Jane…